The beautiful Donna Luisa Isabella de Coyes Franchenos, escorted by her brothers, boards the ship at Barcelona with a heavy heart. She is sailing to Naples to meet for the first time, her elderly future husband.

Only 1 left in stock

A savage storm dismasts the ship and it is captured by one of the swift and deadly galleys of the Ottoman Empire; the entire crew and passengers will be sold as slaves or ransomed. But not Luisa.

The Turkish captain takes Luisa as his own. She is ruined and should she return home, will be forced to live the rest of her life in seclusion in a convent.

On their arrival in Constantinople, the Sultan is furious. He considers her a spoil of war that is rightfully his. Fearing a lifetime locked in a harem, or even death, Luisa fights back.

Based o fact in the mid 17th century, this is the remarkable story of a woman plunged into an alien world of court intrigues and life-or-death episodes set against an extraordinary love story.

There are no reviews yet.

Be the first to review “The Spanish Woman by Evan G. Andrew” Cancel reply

There are no upcoming events. 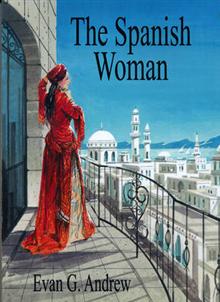